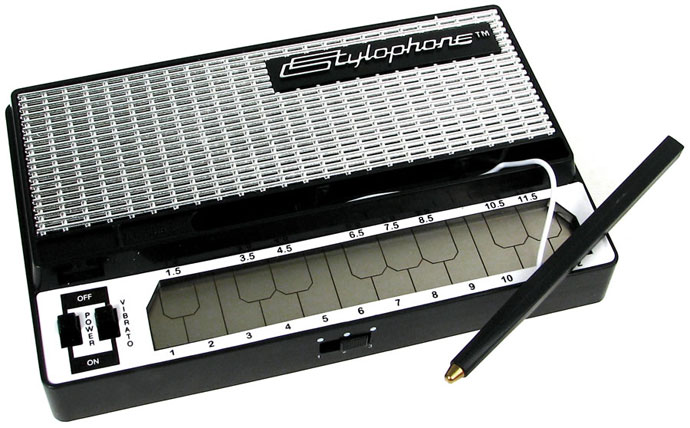 Posted by Stefan Sojka In

The Stylophone is a miniature stylus-operated synthesizer invented in 1967 by Brian Jarvis and going in to production in 1968. It consists of a metal keyboard played by touching it with a stylus — each note being connected to a voltage-controlled oscillator via a different-value resistor – thus closing a circuit. The only other controls were a power switch and a vibrato control on the front panel beside the keyboard, and a tuning control on the rear. Some three million Stylophones were sold, mostly as children’s toys.

The Stylophone was available in three variants: standard, bass and treble, the standard one being by far the most common. There was also a larger version called the 350S with more notes on the keyboard, various voices, a novel ‘wah-wah’ effect that was controlled by moving one’s hand over a photo-sensor, and two styluses.

In the mid-70s a new model appeared which featured a fake wooden effect on the speaker panel, and, more importantly, a volume control. (Previous Stylophones had been infamous for being too loud in quiet situations). This was shortly before the Stylophone ceased production altogether in 1975.

Rolf Harris appeared for several years as the Stylophone’s advertising spokesman in the United Kingdom, and appeared on many “play-along” records sold by the manufacturer.

I was just browsing a gadget shop in town earlier and stumbled across this for £15. I thought to myself – this must just be for show, so I asked for a trial. It’s awesome! I picked it up straight away

The sound is spot-on. It also features two new sounds (one is like a dirty amplified organ, which is excellent) and vibrato for a very different sound. The unit is capable of very impressive volumes – you will be able to drown out all your inferior friends with this little badboy. (Also includes headphone socket in case you don’t want to lose your friends)

External input means you can plug in your MP3 player(/whatever) and jam along to your favourite tunes – the tuning knob on the back is so precise (and has a massive range) so you can really have a blast. And because it sounds so authentic, you could easily use this for recording purposes if the original Stylophone sound is what you are trying to capture

Most of all – experienced or not – this thing is just damn fun to use, and everyone you know will be jealous.

Our Grandson age 6 had excelled in his school work so we decided to buy him a gift to show how proud we were so we bought a Stylophone. I thought they were of the past but no we were delighted to see them on Amazon. We live in the N/east and he lives in Romsey so we don’t see him as often as we’d like but according to his dad he loves it.I can’t mark the durable section as he hasn’t had it long enough to comment, but it is something very different and I’m delighted with the purchase.